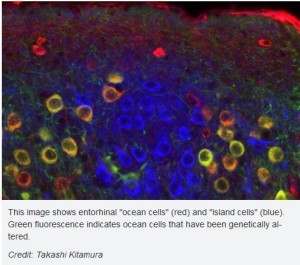 In the research described within this article MIT researchers Chen Sun and Takashi Kitamura report findings that show that the previous belief that information about the physical location or context of events at the time at which they occur are separated within the hippocampus are not correct. Specifically their data indicates that that location and temporal information are actually fed separately to the hippocampus indicating that these features of memories have been processed earlier in the memory processing flow. They found that an area known as the entorhinal cortex contains two types of cells that they refer to as island cells and ocean cells. Their research indicates that island cells seem to be involved in processing timing information while ocean cells seem to play a role in locating where events have occurred.