Description: You may have seen concerns raised in the media about the proliferation of fake or misleading news stories and especially how such stories can gain quite a high degree of traction through social media dissemination. Think about what you know about how Facebook is structured and used and then think about how that might contribute to (or not) the spread of fake or limited news stories. Once you have done that read the article linked below to see how some of this issue links into cognitive psychological theories about the nature of thought in general and about things like confirmation bias in particular. 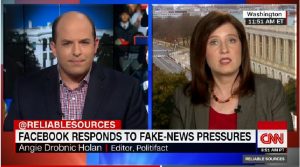 Facebook is an amazing mechanism for connecting people and organizations. However, unlike the web in general that somewhat passively waits to be sought out and searched Facebook is partly built to show you more of what you have already indicated you like or are interested in.  The researchers whose study is briefly discussed in the linked article point out that this facet of Facebook essentially reinforces a cognitive bias in how humans select and process information. Called confirmation bias it suggests that we are more likely to notice and process information that confirms beliefs or desires we already hold. During the last American federal election this meant that clusters of like-minded people were more engaged in sharing information that supported their beliefs than in regularly reviewing a broader array of views and perspectives as might be seen in mainstream media. The implications of this confluence of cognitive bias and limited exposure to broad arrays of information is discussed as a concern in light of the increasing number of fake or misleading “news stories” that seem to be popping up and getting circulated through social media. Critical thinking, as always, takes a bit of work and initiative.