Description: Having a boss who is “certifiable” is clearly not going to be good for one’s wellbeing and mental health but what collections of boss personality traits are the most toxic? Well what comes to mind in relation to the term “dark triad of personality traits?” Darth Vader? … not far off the mark actually. Del Paulus from the University of British Columbia, has been studying the dark side of personality looking at the traits that are associated with the sorts of people we run into once in a while in our daily lives including Narcissists, Machiavellians, Non-clinical psychopaths and everyday sadists. All of these “fun” people score high on measures of callousness (lack of empathy) and yet, because they tend to be extroverted and sociable, they make good first impressions and we are sucked in (read more in the Psychology Today article linked in the Further Reading section below). So what if you had a boss like that? Well the researchers whose work is discussed in the linked article looked precisely at that question. So, after you have formed a few of your own hypotheses give it a read. 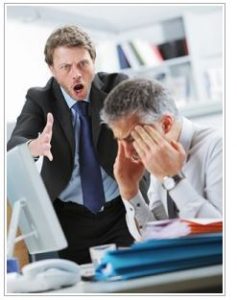 So bosses whose personality reflect the “dark side” of human personality have work interactions that not only cause their employees’ well being to suffer but also create work climates (cultures) that lead to higher rates of counterproductive work behavior and workplace bullying among many employees, not just those with dark side personality tendencies. Removing the toxic boss will help but much more organizational remedial work may be required before things get better.

Where do you score on the Dark Side? Take the test: http://personality-testing.info/tests/SD3/