Description: Daniel Kahneman and Amos Tversky (both psychologists) won the Nobel Prize in economics for their work on biases in human decision making in 2002. More recently, Kahneman wrote a book entitled Thinking, Fast and Slow in which he describes, in detail, the different systems we use when we are thinking quickly and “instinctively” as opposed to when we are thinking more slowly, purposefully and hopefully rationally. There IS survival value in fast thinking. If a bear comes crashing out of the bush and charging at you it is much better to react quickly and to not waste time reflecting on what type of bear it is or on what the Parks Canada bears country guide might have suggested. So, can you come up with a hypothesis as to why Kahneman’s book is considered required reading (and re-reading) by members of the management and office staff of a number of major league baseball teams? Think about why that might be and then have a read through the article linked below to see what several people who work for major league teams have to say.

Source: This Book is Not About Baseball, But Baseball Teams Swear by It, Joe Lemire, The New York Times. 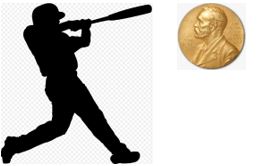 Have you seen the Clint Eastwood film “Trouble with the Curve?” One of the story lines focuses on the tensions between the “old” ways of scouting baseball prospects by going and watching them play and the “new way” of looking closely and only at prospects’ numbers, their playing statistics. In the film (spoiler alert, but not surprisingly) the old ways do a lot better, at least in the case of the prospect that the film focusses on, the one who has trouble hitting curve balls. In contrast with message of the film, the application of Kahneman and Tversky’s work to the task of selecting prospects in baseball suggests that the challenge can actually be to get past what your eyes are telling you about what a prospect looks like and pay attention to the data you have in hand. If you would like to further explore this approach to baseball team building read Michael Lewis’ book Money Ball.

Gines, S. (2017). Tastes for true talent: How professional baseball scouts define talent and decide who gets to play. Link

Weller, E. (2020). The Data Revolution: An Examination of the Use of Scouting and Analytics in Major League Baseball Front Offices. Link