Description: Even if you are not old enough to have experienced the 1960’s and 70’s personally you are no doubt aware that one of the things that era was known for is the illicit use of drugs and of psychedelics like LSD, peyote, mescaline and magic mushrooms. Within what was referred to as counterculture (outside of the mainstream or the “establishment”) they were referred to as mind expanding substances. The idea was that use of such substances could open one’s mind up to a broader, deeper perception of reality. Beyond recreational use there were also, later reveled, “experiments” conducted on mental patients with the interest and support of the CIA that were not intended as investigation of their potential healing capacities but more as investigations of their potential for use in interrogation procedures. Nothing about those uses of psychedelic drugs sound particularly ethical or useful, right? So, given this, would it surprise you to learn that the state of Oregon has provided limited approval for the use of magic mushrooms in clinical settings under the supervision of clinical therapists for the treatment of things from anxiety and depression to smoking cessation? Want to find out more about these uses and about what brain scans are showing about how they work? Well, then read the article linked below to find out. 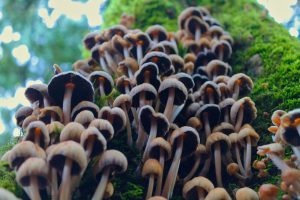 So did it surprise you to read that what is being tried in Oregon is not so much a modern turn in the exploration of psychedelics in general psilocybin mushrooms in particular but a revisitation of work done in the 1950’s and 60’s on these same questions? The biggest consideration is that Oregon is not simply looking at legalization (magic mushrooms cannot be sold retail) and nor are they looking at reducing harms associated with a war on drugs approach to magic mushrooms. Rather they are building on the idea that the carefully managed use of magic mushrooms in clinical settings with clinical supervision has the potential to contribute to powerful, positive life change. What do you think? It is not the 1960’s “flower power” but perhaps a new mushroom power (and NOT a Super Mario version at that)!

Slate Star Codex Is There A Case For Skepticism Of Psychedelic Therapy? Link

McCoy, A. W. (2007). Science in Dachaus shadow: HEBB, Beecher, and the development of CIA psychological torture and modern medical ethics. Journal of the History of the Behavioral Sciences, 43(4), 401. Link