Description: The Canadian cellular services company, Bell, launched the Let’s Talk campaign in 2010. It is focused on reducing/eliminating stigma associated with mental illness. Stigma, related to mental illness, is a social phenomenon involving beliefs about the nature of mental illness (e.g., that it is somehow the fault of the people who struggle with it) and its consequences (e.g., that people who have had issues with mental illness cannot be trusted and perhaps should be avoided or shunned). Such beliefs are not founded on any objective data and they make it difficult for those in need of assistance to access what they need and to stay connected with the very social support networks that they need as they deal with mental health challenges. Bell’s campaign has been very successful, not just in relation to how the general public thinks and talks about mental illness and mental health and wellness but also in terms of the 4121 million dollars the Let’s Talk campaign has committed to mental health in Canada. There has been some criticism of the campaign along the way pointing to the PR payoff Bell has enjoyed from the Let’s Talk campaign. There is no doubt, however that it has done a lot of good in relation to stigma and associated attitudes towards mental illness. One additional issue regarding the campaign involves a bit of concern that it may stop short in some ways as it suggests that just being able to talk to someone, to be told that someone is there and prepared to listen when someone wants or needs to talk about their mental health issues is all people need at such times. Taking nothing at all away from the message that being heard and not stigmatized by those close to us is a vital part coping what about the additional “talk” that is very likely needed in the quest for mental health? Think for a minute about what you know or believe about what sort of therapeutic talk might be needed. Who should provide it? What should it look /sound like? What sorts of signs, criteria or markers should one be looking for and asking about when trying to decide which therapist to engage in healing talk with? Once you have your thoughts in order, read the article linked below in which two Psychologists work through this important aspect of talk related to mental health. 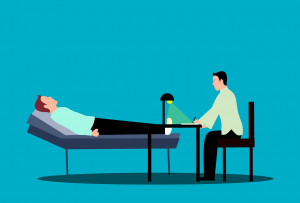 Image by mohamed_hassan from Pixabay

So, how did your thoughts, criteria and suggested questions map out in relation to those provided by the Psychologists in the linked article? They are right in saying that is should not entirely be the responsibility of those seeking therapeutic assistance to judge the value and validity of what is being offered. The model of practice adopted by the Canadian and American Psychological Associations and legislatively supported, in Canada by provincial Colleges of Psychologists and in the United States by similar state level regulatory bodies is most generally described as the Scientist Practitioner model. At the core of this model is the belief that therapists in clinical practice must have a deep undressing of the scientific roots of their therapeutic practice and an ongoing commitment to remaining current with relevant psychological science, to utilize scientific principles in their ongoing practice evaluation (what is working for who and how well is it working), and, most importantly, to only utilize therapeutic approaches and practices that have been shown by scientific research to be effective. This is seen not just as a good idea but also as a key ethical commitment that psychotherapists must hold to and regularly reflect upon. It is an important part of assuring that therapeutic talk is therapeutically effective talk. So, yes, there IS more to talk about.