Description: Do you believe that it is, or might be, possible to communicate with the departed? It is around Halloween after all. I bet you know about and may have actually tried one of the supposed “technologies” for communicating with the spirit world, a Ouija board. If you believe that things like Ouija boards do what they are sometimes thought to make possible then you may not need to read any further and you can just move on to your preparations for whatever spirit communication experiences you have planned for this Halloween. But, perhaps you are more of a sceptic and believe that spirit communication is not possible and that there is no scientific evidence that you are aware of that things like Ouija boards and those who use them do what they are purported to be able to do. Perhaps you say you are a scientific skeptic who “knows” that it cannot be true that people are actually communicating with the spirits of departed humans using Ouija boards. Now, while I tend to agree with this sentiment, consider this. Many people using Ouija boards do not believe that they are “faking it,” so what is going on, are they deluded or otherwise crazy? As a psychologist and long-time psychology instructor I try to explain psychological interest in phenomena like this in this way. There are a LOT of things out there, like Ouija board experiences or like Clever Hans the horse who seemed to be able to do math and spell, that are presented as involving some things we have trouble believing and which may or may not be directly scientifically testable. For example, how would we find a “spirit that would help us in scientifically determining who can and cannot communicate with them and how? That said, when we see people who seem to be using Ouija boards and who honestly swear that it is not them who are making it move, despite their fingers (and those of someone else) touching the Ouija, something is going on and while we may not be able to scientifically test the ‘spirits are causing it to move’ hypothesis (belief) we CAN investigate what else might be going on. That possible something else could be VERY interesting even if it does not involve ‘real’ spirits. So, think for a moment about what sorts of things that ‘something else’ might be and then read the article linked below that also does just that.

Source: Ouija boards: Three factors that might explain why they appear to work for some, Megan Kennedy, The Conversation. 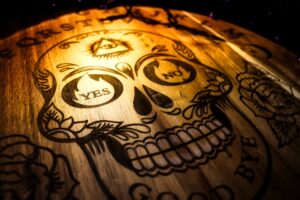 Image by Hocus-Phocus from Pixabay

It was years ago when I was a teenager, some friends of mine and I tried out a Ouija board. I was some years away from finding and studying Psychology but even so I was curious as to what was going on. None of us had any particular dead people we wanted to connect with so, instead, we asked the board controlling ‘spirit’ if it could do something to demonstrate that it was among or with us. As we asked the question I had my index fingers resting lightly on the Ouija as did one of my friends. The Ouija had seemed to slide across the board without our having initiated any movement using our fingers (we both swore later) and answered yes or no questions like, “Are you in the spirit world?” “Do you know about our world?” and “Are we and not you making the Ouija to move?” with the answers being Yes, Yes and No. We them came up with what we thought would be a critical test. We asked, “can you make something in this room move to prove that you are here?” The answer was YES. So, we placed a glass of water beside the board then we said, “OK then, knock over the glass of water!” There was a few moments of silence and no movement of the Ouija and then it pivoted slightly so that it pointy end was aiming at the glass of water and we held our breathes and then the Ouija moved across the board and, quite ineffectually, bumped the water glass several times with its pointed end. Certainly NOT the spirit world proof we were hoping for (or worrying might appear). We abandoned our search for the spirit world at that point. However, over the years I have gone back to that memory a number of times as I roamed around in psychology and kept coming back to the question of how two people could place their fingers on a Ouija, have it move, and both people could “know’ that they had nothing to do with the movement. The data or the Ouija I was touching trying to physically tip the glass over kept bringing me back to the hypothesis that it was my friend and/or I that were acting in that situation. Phrases like ‘plausible deniability of agency’ have occurred to me. Research into what is going on in hypnosis contains something of this idea that people can do things and then deny, even to themselves, that they did them. What all this and the research discussed in the linked article suggest is that we should not stop thinking scientifically when something seems untestable (like communicating with spirits). In fact, if we start thinking hard in such situations we may run across some truly amazing things, they just may not be spirits (or ESP, or…).

Knoblich, G., Butterfill, S., & Sebanz, N. (2011). Psychological research on joint action: theory and data. Psychology of learning and motivation, 54, 59-101. Link or have a look at this Link on Ideomotor Theory

Emerging from the Mystical: Rethinking Muscle Response Testing as an Ideomotor Effect. Link