Description: Maybe you are not interested in having another look at the question of why it might be that some people are more receptive to the conspiracy theories proffered by the QAnon bunch but, despite their seeming aversion to it, science can help us understand them a bit better. So, take a moment and consider this. We tend to assume that the main predictor of interest in and engagement with conspiracy theories is political stance with people whose political perspectives are best described as extreme right being much more likely to be involved. But consider the idea that political ‘bandwagons’ are things that people hop onto when they view them as supportive of beliefs they already have. In other words, what if conspiracy theory adherents find extreme right political groups after they have their views set not before? This would mean that involvement in extreme right political groups would correlate with beliefs in conspiracy theories but perhaps not be so causal. Think about that and think about what other sorts of things (e.g., personality tendencies etc.) might better predict engagement with conspiracy theories and thus get us closer to understanding causal possibilities? Once you have your hypotheses in order have a read through the article linked below to see what some recent research suggests. 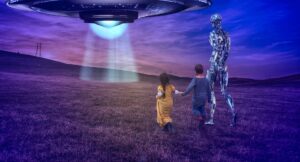 Image by Deiterich from Pixabay

The suggestion by the researcher quoted in the article that research into why people find and engage with conspiracy theories has not looked beyond political choices is an important one. It is harder to get into the underlying, potentially causal, factors involved in conspiracy theory engagement if we stay at the political level. Now, the identification of links to personality factors such as anti-establishment orientations and propensity for interpersonal conflict moves us past political leanings and towards more underlying influences of openness to conspiracy theories. Liking of Trump falls somewhere in the middle I think. The suggestion that these links begin to speak to the question of why conspiracy theory followers are difficult to shift, or change, is interesting and challenging. Of course, more research is needed, in a non-partisan fashion!