Description: There is no question but that playing professional sports requires a lot of skill (and likely a fair bit of Psychology too). Here is a question though: Do fantasy sports require skill? Certainly not the same skills as actually playing the particular sports they focus upon, but do they require skill and if so what sorts of skills? Why dos this questions matter (other than in terms of philosophy por psychology)?  Well, think about this. Online gambling is not permitted across most jurisdictional (provincial or state) boundaries, BUT, games of skill are NOT so restricted (that is also why many contests using random draws – chance events — have skill testing questions). Now, before you start speculating about what sort of skills might be involved in fantasy sports think about a more basic methodological challenge. Yes, there are likely lots of skills involved (such as reading statistics, tracking news stories on players’ day to day fitness or wellness, factoring in weather, and avoiding biases associated with your beliefs about your home team or your favorite players) but what if all you were trying to show is that there IS skill involved and that fantasy sports are NOT games of chance (luck)? If a large fantasy sports online platform (that allows members to put together their dream teams by selecting players from many teams in a pro sport and highest scoring “teams” win daily, weekly and season prize-money) gave you access to all their data for a given year what “tests” would you run to look for evidence of chance and/or skill? Remember, all you have to show is that skill matters over chance – you do NOT have to show what skills are involved in order to help fantasy sports site make their case for having their games cross jurisdictional lines. Once you have given some thought to how you would proceed read through the article linked below to see what those researchers set up and ran. 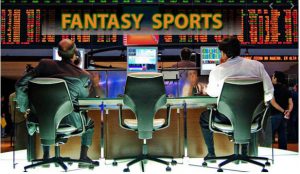 So, yes, skill IS involved in fantasy sports. Players are consistently good or bad, their win/loss rates were very similar when the first and second half season performances were compared, players that played MORE games were consistently better at them than players who only played a few games,  and human players consistently did better in the fantasy leagues than did computer algorithms that picked players at random). Taken together, these tests demonstrated that there IS skill involved in fantasy league play despite telling us nothing about what those skills are. The lead researcher summarized it nicely by saying that their research would not help fantasy players pick better teams, but it would help them talk better smack when they are sitting at the top of their fantasy league standings.