Description: Quick pop-quiz! What does the cerebellum do? It is involved in producing smooth motor movement right (balance, equilibrium etc.)? Yes, right, but what else is it involved in? Well, how about schizophrenia? As our understanding of the neurological factors involved in psychological functions and dysfunctions expands we are increasingly realizing more clearly something neuroscientists have been telling us for years…. that our brains are not full of many hyper-specialized processing centers (e.g., a mood center, a decision center, a social processing center etc). Rather, areas of the brain work together to produce complex human behaviour or dysfunction together to produce the symptoms of complex human disorders such as schizophrenia. So, how is the cerebellum involved in the symptoms of schizophrenia, well read the linked article below to find out. 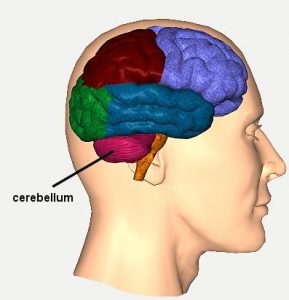 So if losses in the ability to track and modulate time in relation to brain activities is a part of what happens in schizophrenia then finding out how the brain monitors and manages time and how we might intervene and adjust this process might be important in our understanding and treatment of schizophrenia. The work described in the article linked above suggests that the cerebellum might play a role in time managing brain events. Rats showing schizophrenia-like symptoms showed substantial improvement in functioning when the cerebellum areas of their brains were stimulated. Understanding just how the brain functions that are impaired or lost in schizophrenia are managed in “normally functioning” individuals take us a long way towards understanding this complex disorder and eventually towards devising treatments or perhaps even cures for the disorder.

Giersch, A., Lalanne, L., & Isope, P. (2016). Implicit Timing as the Missing Link between Neurobiological and Self Disorders in Schizophrenia?. Frontiers in Human Neuroscience, 10. https://www.ncbi.nlm.nih.gov/pmc/articles/PMC4913093/