Description: This past week I ran a workshop for an agency I have worked with over the past two decades (Metis Calgary Family Services). The agency provides supports, services and cultural and community connections for urban Aboriginal and Metis children, youth, adults and families. The workshop was focused on the issue of suicide and the hugely variable rates of suicide among First Nations, Metis, and Inuit people and communities. I am not going to reproduce the workshop here for a number of practical and ethical reasons, but I thought it would be helpful in terms of understandings of what indigenizing Psychology might (could and should) involve to have you consider a couple of issues and concepts that were part of the workshop. According to the World Health Organization (WHO), there has been a 60% increase in the rates of suicide world-wide over the past 45 years. So, in addition to the vital urgency of addressing the fact the suicides rates among many indigenous communities are among the highest on the planet we have this other global concern. The WHO strategy (links below) begins by taking on the stigma and myths associated with suicide that makes it something that people (everyone as well as those having suicidal thoughts) do not talk about. The WHO suggests that a big part of national strategies to deal with suicide is to educate as many people as possible of the individual risks and warning signs of suicidal thoughts and planning. The education should, according to the WHO, include information and practice in how to connect and engage with people who may be suicidal and assist them in accessing supports and services that can help them turn away from their suicidal thoughts and plans. The positive impact of such initiatives in relation to general populations has been documented in research (see References section below). However, this sort of positive impact has NOT been demonstrated among indigenous people and communities and there is even some evidence that participation in this sort of training may contribute to increases in suicidal ideation among Indigenous participants.

If you look at some of the other posts I have made on issues and urgencies involved in indigenizing Psychology (Links in the References Section below) you will see that part of the issue here is the individual, a-cultural perspective that informs much of mainstream western psychology. When considering suicidal ideation this leads to a search for individual risks that are predictive of increased likelihood of suicidal behavior. How does this work in the risk-target rich environments of indigenous communities? Not so well. Consider the following tables. The first is a list of individual risk factors that were found to be associated with suicide among aboriginal youth.

The second table lists protective factors or things that Psychological research tells us reduce the rate of suicide among individual indigenous youth that they are true or apply to.

Now look at the list of protective factors and then look up at the list of risk factors and try and match each protective factor to a risk factor that it would directly address. Did you notice how the protective factors most map, or map best, onto the risks in the right-hand column and not so well, if at all on the risk in the left-hand column? In some of my previous posts on indigenizing Psychology I talked about the concept of cultural continuity and the vital role it can play in things like wellbeing and rates of suicide within Indigenous communities.

“We’ve listened to First nations youth across the country who’ve said that the conversation on suicide prevention that’s focused on death and dying is not helpful to them. They want to focus on how to live life. We’ve taken a community-based approach because community is what facilitates wellness and supports life.”

You can find out more about what this might mean for Psychology and for addressing the issue of indigenous youth suicide in culturally respectful ways by visiting the Wise Practices site linked above and below. The First Nations Mental Wellness Continuum Framework described there has much that can help all (and Psychology in particular) come to more culturally respectful understandings of risks, protective factors, culturally safe AND cultural-enhancing practices in relation to suicide. Have a look at the site and at some of the initiatives it describes to get a look at how this is working and, if you think about it, how it could work more broadly. 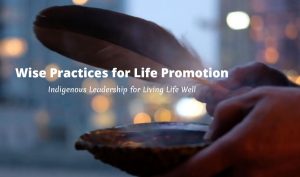 Now here is a bit of a plot twist. If you use the search function on this site to search “Twenge” Jean Twenge is a Psychologist who looks at population level data and trends and, in her book (see the Reference section below), she points out that, among young people (and especially among females) born since 1994 (in the United States but we are seeing the same trends in Canada and elsewhere) there has been alarming increases in hospitalizations for self-harm (up nearly 100%) and the suicide rate among 15 to 19 year-olds (up around 40%). Why? Well Twenge points out that these trends are powerfully correlated with the fact that this generation is the very first to have had access to smartphones and the internet (social media etc.) over the entirety of their development. The debate over the role of “screen time” in these trends is raging (see the posts that resulted from your Twenge search) and, as I have stated, of course, more research is needed. But, what sorts of things might an indigenized Psychology suggest should be prominent part of that more research? Here is a thought; maybe we should be looking broadly at the impacts of smart phones and social media, but also of climate change, globalization, huge jumps in the uncertainly of possible career paths on the cultural and community continuities (well, the LACK thereof) on the wellbeing and identity development and of mainstream, non-indigenous youth and young adults. Maybe it is just me, but I think there might be a LOT there and a lot of stuff that would be very helpful to emerging adults both indigenous and non-indigenous as they move out into their worlds.

Twenge, J. M. (2017). IGen: Why today’s super-connected kids are growing up less rebellious, more tolerant, less happy–and completely unprepared for adulthood–and what that means for the rest of us. Simon and Schuster.

(NOTE: Search Twenge in the search bar of this site for a n umber of posts related to her work and to the issue of screen time in the lives of young people born since 1994).