Description: As I write this it is October 31 and thus Halloween in a very different social space and time than previous All Hallows Eves. I am not going to try and make a case for how hard it will be for children to survive without their annua blast of cheap treats (they will be fine). I would like you to think about why it is that creepy crawly things like bugs, spiders and snakes are so, well, creepy. Those to decorate their yards for Halloween do not use versions of cute puppies or kittens. What is it about the creepy stuff that creeps us out? Think about that for a moment and then read the linked article that talk about some of the research into, likely at least some, of what your are already considering for your hypothesizing about this question. 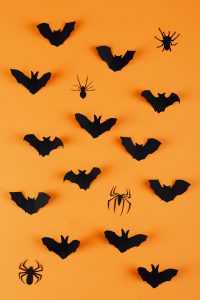 At a deep visceral, likely genetic, level we find bugs and creepy crawlers creepy and disgusting. How was this laid down into our genes? Well, simply survival of the fittest is the usual argument. Imagine how long a person would last in an environment rife with poisonous snakes if they thought that snakes were cute and cuddly? Not long, right? Well, think of it this way, it is likely that anyone with those tendencies would be removed from the gene pool by the very things they find cute and cuddly before they are able to reproduce and pass those dodgy genes along. Likewise, bugs, worms, etc. tend to be found in places ripe with bacteria (damp, unclean) and so for the same reasons those that are reticent about or who find such things disgusting were more likely to survive and reproduce and, by extension, produce us. The fact we see evidence of this in the pupil dilation of young infants supports this nicely, they show it before they could have learned it so it must be wired in. It IS interesting that there is cultural variation in this. I visited a bug market in Shanghai a few years ago and saw that for some bugs (crickets most notably) many people were able to get past their fears and creepy feelings. I was amazed by the large numbers of people sitting near one stall or another opening screw-top tin after tin and probing something inside the tins with a piece of straw. I found out that each tin contained a small c ricket and they were testing its “character” looking for promising acquisitions to their cricket pet array. We are quite a species are we not?

It is not fear of bugs, it is disgust. Link