Description: These days, and with increasing frequency as the November 6, 2018 American midterm elections approach, when people I meet find out I am a psychologist I am often asked some version of a “… so what is with Trump” question or in other words questions about how for “out there”  is Trump or is, or what kind of disordered is he? In responding to such questions I usually start by saying a couple of things: First that as a developmental psychologist I am not formally qualified to provide individual diagnoses of psychological disorder and second that, in line with the ‘Goldwater rule’ and with general ethical principles laid out by the Canadian and American Psychological Associations even if I were diagnostically qualified I have not met or psychologically assessed Donald Trump and am therefore unable to offer a diagnostic opinion. Boring huh? What I usually go on to say though, is that being a psychology teacher (33 years) I love to talk to people about Psychology and Psychological disorders and then I ask them what parts of Psychology and Psychological disorders they think might apply to Mr. Trump. We can then talk about Psychological theories, concepts, disorders and diagnostic criteria in general without my having to offer and opinion of the state of Mr. Trumps mind (though, privately, I have a few of those). So, from a psychological perspective, what do you think of Donald Trump? Once you have your thoughts in order read the article linked below for a discussion of possibilities and limits (and there are a couple of related articles in te Reference list down below that you might find intersting too).

Source: Narcissists aren’t ‘crazy’ – but they are unlikely to change, the Washington Post 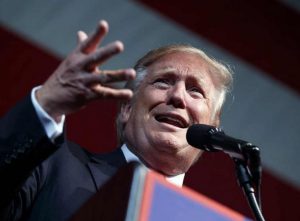 So how did that “conversation” go for you? Do you understand the difference between personality disorders and psychiatric disorders such a depression and schizophrenia? The nature and status of personality disorders are much debated especially by those charged with potentially revising that section of the Diagnostic and Statistical Manual. It is perhaps best to think of personality disorders as extreme personalities that are reflective of enduring ways of being in the world, rather than disorders that have specific point of onset and realistic probability of recovery (which is a standard introduction to abnormal psychology slide and lecture point). This means that personality disorders reflect behavioural tendencies or traits that many people use once in a while but that some people come to have define them and their actions in the world on an ongoing basis. I suppose one of the most depressing or alarming realities about personality disorders (in light of the number of ways narcissism comes up in discussions about recent American presidents) is that it is hard to treat, largely because those who meets its diagnostic criteria do not believe that they have a problem or that they need treatment. It reminds me of a scene from the old television show Frasier in which Frasier’s brother Niles (also a psychiatrist like his brother) says, as he is leaving to run his regular group therapy session for personality disordered lawyers, “I love working with lawyers,… they have lots of money and they never get better.”