Description: The nature of our spoken communication skills is most certainly a big part of our adaptive evolutionary advantage as a species. Using language, we can break out of the ‘here and now’ and discuss past events and future possibilities and we can organize and coordinate complex individual and social tasks and strategies using our spoken language skills. The big question, from an evolutionary perspective, is how and when did spoken language emerge and develop with our ancestors (assuming that it was not gifted to us by gods or aliens). Part of tis question concerns accounts of the brain evolution or jump-ups in brain complexity that were likely correlated with the emergence and evolutionary development of spoken language. Did the emergence of language grow our brains (the cortex regions) or did a more complex brain make the emergence of language possible? Put your thought (or your questions) on this topic in order and then read the article linked below to find out about bold recent speculations regarding these issues and about the firm theoretic speculative push back by some BIG names in the areas of language development and evolution.

Source: A Sneaky Theory of Where Language Came From. Ben James, The Atlantic. 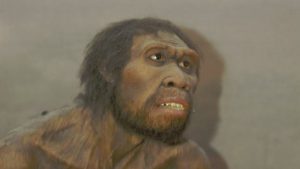 So, what do you think? Does it make sense to speculate that the development of complex carefully sequenced tool building techniques produced the jumps in brain complexity that made spoken language possible? As well, does it seem compelling that the vital importance of specific order to actions in tool making might have been ‘hijacked’ by the production of grammatically organized language where order matters just as deeply in the transmission of meaning? It IS easier to see how complexity and order might evolutionarily emerge tough developments in tool making than in spoken utterances isn’t it? Or is that just a metaphoric appropriation as suggested by Noam Chomsky and other staunch, articulate critics of this perspective. Evolutionary theorizing is not nearly as amenable to the ‘more research’ fix to theory and knowledge shortfalls in other parts of Psychology so what we can say here, perhaps, is that more thinking and discussing are needed!