Description: Book titles such as Men are from Mars and Women are from Venus (John Gray) suggest that there are some fundamental differences between men and women. What might that hypothesis or sentiment suggest about the brains of men and women? Well, the idea that, at the level of the brain, men and women are essentially different kinds of people has been around for many many years. While we might not be surprised at such a view existing 100 years ago at the height of the sorts of views advanced by Freud that there are fundamental, basic and large differences between the sexes which are very likely reflective of brain based differences what are we to make of the fact that such a view can be found today at a time when brain scanning abilities might allow up to address the brain difference question directly. So, ARE there sex differences in brain structure, organization, or function? First, sort out what YOU think. What have you heard? What do you think you know? What do you think might be “the truth”? After you have reflected briefly on these questions read through the article linked below for an overview of recent research and discussion in this area. 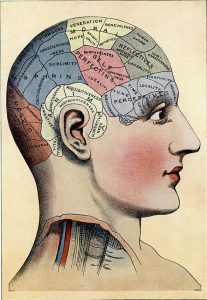 So, it seems that even the data does not tend to get in the way of us playing with a hypothesis (or assumption) that we are comfortable with including the suggestion that autism reflects and “extreme male brain”. One of the authors of the article linked above (Daphne Joel) examined a huge number of brains and concluded that claims about general differences in brain structure or organization along sex lines cannot actually be seen at the level of individual brains. What does that mean? Well it is like what we should be reminding ourselves about a lot when we talk about any “sex-differences” in things like mathematics performance – even when there are significant differences in the population averages on scores or abilities in any area of human endeavor the distribution overlaps are massive. So, in math skills for example, there are many, many females who outperform males and as such knowing only that an individual is male or female does not make possible any sort of prediction (that would be accurate or useful) about their math skills. Add that to the increasing pile of aggregated findings that there are even fewer mean differences than we used to think (see the APA blog reference below in Further Reading) and it becomes clearer that we perhaps need to examine our assumptions about how deep or brain-based (or real) sex differences really are. The bottom line is that some of our assumptions are not matters of simple personal biases but are, rather, reflections of deeper, socio-cultural belief systems. Rather than blaming individuals for sustaining or advancing them we need to more carefully examine our shared assumptions and look more objectively at the data!

Fine, C. (2010). From scanner to sound bite: Issues in interpreting and reporting sex differences in the brain. Current Directions in Psychological Science, 19(5), 280-283.  http://sites.oxy.edu/clint/physio/article/fromscannertosoundbiteissuesininterpretingandreportingsexdifferencesinthebrain.pdf