Description: The next time you’re in a large store go have a look at the toy section. What you’ll probably notice are that the toys are divided essentially into pink girls’ aisles and blue boys’ aisles. Think about why this might be the case and then think about what the impact might be doing away with this stereotyped approach to offering toys for sale. 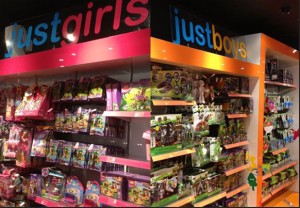 The aisles in in the toy departments of most large stores are typically gender divided with “girl” toys separated from “boy” toys. While this might simply be a marketing strategy it likely also has implications for gender role socialization. What might the developmental application to be of doing away with the stereotyped way of marketing children’s toys. A large box store company (Target, which recently closed all its Canadian stores) has provided us with a natural experimental opportunity by making all of its toy store aisles gender-neutral mixing what might be thought of stereotypically as boys toys with girls toys. This article provides an overview of the research that suggests that the sort of toy department arrangement is not simply a passive reflection of societally driven gender stereotypes but that such arrangements may actually play a role in the development of those gender role stereotypes. While no data has yet been collected in the toy department at target as to whether there gender-neutral approach to the arrangement of their toy department will have an impact on the development of the children who shop their it does suggest a study that is worth doing.

Clerkin, C., & Cherney, I. D. (2006, November). Where do children draw the line between pink and blue? Talk given at the Nebraska Psychological Society and Association for Psychological & Educational Research in Kansas Convention, Hays, KS.