Description: In my previous post (http://wileypsychologyupdates.ca/neuroscience/expanding-psychology-starting-with-wisdom/) I introduced a new thread I am going to be focusing on, among other things, over the spring and summer. In that post I introduced an article looking at the place of the concept of wisdom in western society and thought and introduced the idea of rethinking about what it might mean to “indigenize” (in quoted because I am not sure I like the term) Psychology. I suggested that in order to get started on this quest we need to begin by noticing some of the assumptions in which our Psychological theories and concepts about persons, individuals, abnormality and wellness (among other concepts) are grounded. I have found that discussions involving foundational criticisms of Psychology are a bit hard to follow (though perhaps it is just because I may not be a particularly wise person) and so I thought we could start by considering some research that is sniffing around some potentially foundational and yet diverse assumption. Following along with a consideration of the concept and cultural and community role of Elders in aboriginal communities consider these two questions. First, what roles might indigenous Elders (recognized by their communities as such) play in the development and implementation of health strategies in aboriginal communities? Second, think about potential roles that old people (the elderly) might play in the development and implementation of health strategies in the cities states or provinces of mainstream society in North America. After some reflection on these questions, read the article linked below which describes a qualitative study intended to address the first question above in several communities in the Gitxsan Territory in Northern British Columbia. 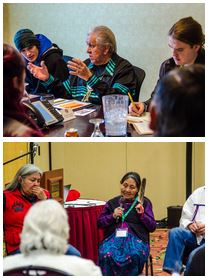 After looking through the article linked above do you have a sense of the differences between Elders (among the Gitxsan) and “the elderly” within mainstream culture? If so it is worth reflecting upon what those differences might mean for developing a workable Psychology of health, addictive behavior, and individual and community change. The roles that Elders might play in both community and personal development and health points not only to Elders’ roles but also to something of the relationship between persons, their communities, and their culture – people are understand not just as “who” they are but simultaneously by where they are and what relationships they are defined though. I will come back to this observation in later posts, but it may well be one of the important foundational differences we will need to better understand if we are to properly think about what an Indigenous Psychology might look like.