Description: If you look within Psychology textbooks and scan the Psychological research literatures you can find a fair amount of discussion about culture and about the roles that culture (cultural heritage, cultural background, and current cultural connections) play in Psychological development and functioning. In many instances, however, culture is mainly employed as a marker for problems of psychological adjustment, health or functioning. Suicide, for example, is seen as a particularly serious problem among aboriginal youth in North America. In the case of suicide, culture is often viewed simply as a marker of higher risk, though challenges in cultural continuity, once articulated, can provide a much more nuanced picture of the phenomenon AND suggests a number of culturally grounded strategies that could significantly reduce rates of suicide among aboriginal youth (see the Chandler references below in Further Reading). It is somewhat difficult to describe the importance of a culturally informed or culturally aware or culturally grounded approach to psychological adjustment, health and development when the mainstream, North American, approach to Psychology and to personal identity development too for that matter is essentially entirely blind to culture. Members of minority cultural groups, especially in urban settings, do, certainly, encounter racism in various forms from time to time. However, at least as large an issue can be linked not to racism but rather to the indifference (see DeVerteuil & Wilson reference below in Further Reading) that flows from the mainstream belief that adjustment, wellbeing and development are simply human and in no ways flavored, organized, or otherwise influenced by culture, history and heritage. By not consciously acknowledging and practicing their own culture, members of the mainstream (white) culture simply relegate issues of culture and heritage to a back seat or to the “back of the developmental textbook” (where they are typically found) perspective. The fix to this shared oversight or majority blindness is not quick or simple but read the article linked below for an overview of some of what it could mean to consider an indigenous model of mental health and, by extension, of psychological functioning and development.

Source: Is there such a thing as indigenous mental health? Implications for research, education, practice and policy-making in psychology, Carlota Ocampo, Communique, American Psychological Association. 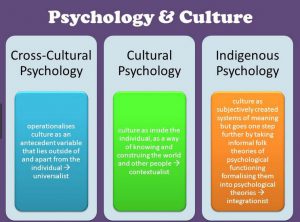 So what do you think of the three theoretic perspectives on culture captured in the definitions shown in the graphic above? The Indigenous Psychology approach challenges many of our mainstream assumptions about the universal nature of psychological development and adaptation. It also provides us with opportunities to much more inclusively understand and engage with aboriginal and Metis cultural communities and, as well, to more deeply understand cultural variation across the whole of Psychological knowledge and practice. I will be posting more articles and comments in this area to think about over the next few months. As we, in Canada, struggle to discern how to effectively proceed with recommendations of the Truth and Reconciliation Commission one of the things that will necessarily change as part of that process is the understanding of culture within theories of Psychological development and functioning and the extent to which Psychology can be indigenized without perpetuating or expanding past aspects of Colonialism. A fascinating and interesting challenge indeed.