Description: Does intelligence decline or increase with age? Turns out this may be too simple a hypothesis. Recent research, discussed in this article, suggests that different parts of our brain function optimally at different points over the life cycle. As a consequence the pattern of the relationship between age and intelligence, when looked at in terms of the sub-tests that make up general intelligence, may be much more complex that used to be thought. 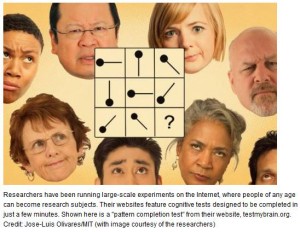 So you have likely heard that the old belief that our intelligence declines as we age is unfounded and that intelligence, after our early 20’s and that our intelligence remains relatively stable over our life-spans with the possibility of some declines towards the end of life. Is this all there is in the way of age related changes in cognitive functioning and intelligence? Not so much it seems. Joshua Hartshorne at MIT looked at cognitive performance of people of many ages using online testing and found that among other things face recognition ability increases up to 30 years of age and then declines from there. Intrigued the researchers looked at historical data showing the performances of many people at many ages on all the sub-tests of standard IQ tests. The researchers created an index that showed the ages at which people’s performance on each subtest reached maximum or optimal levels. They found that raw speed in information processing seems to peak around age 18 or 19, then decline. Short-term memory continues to improve until around age 25, when it levels off and then begins to drop around age 35.The ability to evaluate other people’s emotional states, the peak occurred much later, in the 40s or 50s. The amount of data the researchers were able to access was described as rare in research into human cognition and provides a much more nuanced view of the course of human cognitive functioning over the life span. You can access some of the tests they uses at the website posted below.

Hartshorne, Jashua and Germine, Laura T. (in press) When does cognitive functioning peak? The asynchronous rise and fall of different cognitive abilities across the lifespan. Psychological Science, http://joshuakhartshorne.org/papers/HartshorneGermine_inpress.pdf