Description: I am sure you know about Dissociative Identity Disorder (DID) or, what used to be called, multiple personality disorder. Is is also quite likely that you owe your understanding of the disorder to popularized accounts in books and films like the three faces of Eve or Sybil. Would it surprise you to read that there is currently something of a debate raging regarding DID with one side arguing that it is underdiagnosed as a disorder and the other arguing that it is largely manufactured by therapists’ hints and suggestions coupled with clients’ desires to please their therapists? A polarized, one might say a multiple personality, debate for sure. Think a bit about what sorts of arguments or data the debate might be turning on and, once you have your thoughts in order read the article linked below which covers something of the history of this debate starting back oner 100 years ago with a couple of early historic cases. 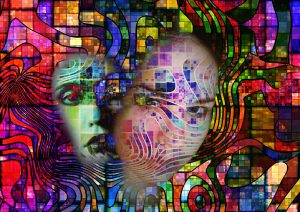 So, the accounts of possible cases of DID do sound more like novels or film plots that clinical case studies. Add in the scores on indicators of suggestibility are strongly related to displays of DID symptoms and things get quite interesting. It is very important to keep in mind when considering this debate that it is far too simple to suggest that some or many individuals might be ‘faking’ their symptoms. If you are able to put that hypothesis aside then the DID debates get quite interesting. Questions regarding the nature if DID relate to questions like what is going on with people who are or appear to be in hypnotic states or what is going on when people use Ouija boards while convinced that despite the fact that their fingers are on the Ouija, they are NOT causing it to move. Fascinating data about the human mind and experience but not quite what we think is going on.

Piper, A., & Merskey, H. (2004). The persistence of folly: A critical examination of dissociative identity disorder. Part I. The excesses of an improbable concept. The Canadian Journal of Psychiatry, 49(9), 592-600. Link