Description: As I contemplated whether to choose to blog on this particular topic I ran across the article linked below and while reading through it, for a number of associative reasons (I suspect), I was reminded of a song by Canadian Blues artist Lest Quitzau called Home on the Range. It contains the line “Welcome to America, ain’t it strange.” The song was on an album from back in 2001 but the line still reverberates today.  Specifically, what struck me as “strange” about America in relation to this blog topic is that America actually has a large enough sample of mass shootings in recent years (even on an annual basis) to ask the question implied by the title of the article. That question is something like, “what do mass shooters have in common?” The picture below is from the Las Vegas Mandalay Bay shootings last October and last night while at the Calgary Flames game against the Florida Panthers we were asked to stand a minute’s silence for those killed just north of where the Panthers play at Marjory Stoneman Douglas High School in Parkland, Florida. There is a LOT in this that is strange. It is strange that a common response to such events is to dig into the North American and particularly into the American focus on individual responsibility is all things to try and figure out both what was wrong with all those shooters and what could have been done to identify them and their future actions early enough to stop them. Unfortunately, this strategy runs up against the documented research fact that if the issue is one of mental instability or mental illness (just if) then it places the individuals of concern into a very small subgroup of all mentally unstable or mentally ill persons – those that may become violent and, further, it places them in the even smaller (microscopic) subgroup of mentally instable or mentally ill people who act in mass violent ways. It is strange that there is profound resistance towards the taking of steps toward gun control in America and that State legislative steps taken in Connecticut following the Sandy Hook Elementary School shootings in 2012 has only managed to track (and only slightly restrict) access to automatic weapons and to limit the size of the magazines in such weapon to 10 bullets.

So….. while it may not be something you feel comfortable doing (and if so them please do not do so and move on to another posting) but reflect for a moment on what you have heard seen and read about the large American mass shootings dataset (its constituent elements are intensely focused upon I the news media) and see if any candidate hypotheses come to mind that could be applied to the question of what mass shooters might or might not have in common. Once you have done that, have a read through the article linked below.

Source: Mass Shooters Are All Different. Except for One Thing: Most are Men. Daniel Victor, The New York Times. 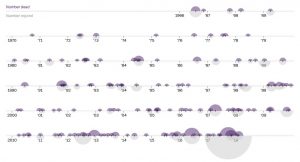 So, the explanation for mass shootings is NOT a clear mental illness. Shooters are often paranoid, resentful or narcissistic but typically NOT to the level of disorder and at least half have no clear evidence of mental illness before they start “crazy” shooting. As such, improved access to mental health care would likely not have resulted in therapeutic engagement for most shooters prior to their acting. A past involving exposure to or engagement in domestic violence may be a factor but certainly NOT a definitive one in that suspecting all involved in the perpetration of domestic violence of being potential mass shooters would result in exponentially more false positives than true positives (although engaging therapeutically with all who perpetrate or observe domestic violence would not be a bad idea). A sense of grievance and a desire for notoriety (particularly in adolescent and young adult shooters) are useful descriptors of mass shooter’s mental states but, again, taking social change or just pushes for social change personally would, like paranoia, resentfulness or narcissism, hardly get us focused closely enough on potential shooters in any way that would be preventatively useful. So what to do? It is not entirely and American problem. Canada had Marc Lepine at Montreal’s Ecole Polytechnique, but that was nearly 30 years ago and was only followed by enough subsequent shooters to fill an automobile as opposed to the 2 to 2.5 busses that could be filled with American mass shooters in the same time frame (and American numbers are increasing – see the figure above). The big difference between Canada and the United States? Well its NOT psychology, at least in relation to the shooters (Marc Lepine certainly had a sense of grievance), hmmm, maybe it is access to guns? Ain’t it strange?