A number of years ago, a researcher by John Gottman made the claim that he could predict, based on a single observational session of a couple interacting with one another while talking about an issue that mattered to them, 94% accuracy within that couple but still be together in one year. He did this not based so much on what the members of that couple said to one another but more on the basis of how they said things and how they physically position themselves relative to one another while interacting as well as a tone of voice that they used. So what you think, can you tell simply by watching a couple interact with their likelihood of staying together or not? 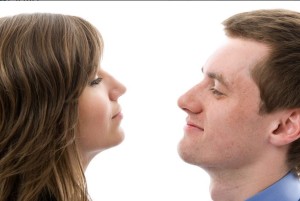 You may have had the experience of watching a couple interact can listing into their conversation (no of course you shouldn’t of been doing that but you did) and saying yourself either “others a happy couple” or alternatively something like “that I can be together for a long”. Social psychological research question is, of course, on what grounds are you making your determination about the viability of the relationship of which you of the deserved perhaps a whole minute or two of interaction. The authors of this research article suggest that the tone of voice being used by the participants in the conversation is more predictive of the viability of their relationship than the specific things are actually saying to one another in that conversation. This leads to an existing research question. Does our ability to predict the viability of relationships based on the tone of voice being used by the participants in that relationship tell us anything at all that might be useful in any effort that we might make to work with that couple to increase the likelihood that they will remain together as a couple in the medium to long term. Does it make sense to you to say to a friend something like “you know you are to speak in a kinder tone of voice to your partner that I noticed you speaking in last night”.