Description: The most poignant symptom of Alzheimer’s disease is the loss of previously consolidated long-term memories. The search is on for therapies that will, in particular reduce the impact of this particular symptom of the disorder. Read the article linked below for an overview of the way fiber-optic or light therapy may have a positive impact in this area. 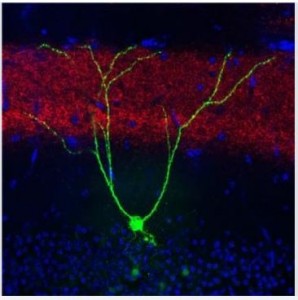 One of the key questions in understanding Alzheimer’s disease has to do with whether or not the memories that typically disappear for those struggling with the disorder are the result of the memories actually being lost or whether it is due to issues related to encoding or retrieval. The research study described in the linked article provides some support for the idea that it’s a retrieval issue. Specifically in mice bred to produce Alzheimer’s disease-like symptoms it’s found that fiber-optic light therapy applied to particular cells or groups of cells involved with particular memories resulted in an increase in the ability to retrieve particular memories. The researchers were able to show that light therapy provided at least temporary increase in memory that seemed to be associated with the regeneration of spines or small knobs on brain cell dendrites through which synaptic connections are formed. While it is not entirely clear why this works or why the effect is temporary the findings suggest a new area of possible investigation that could lead to the mitigation of symptoms and perhaps more related to Alzheimer’s disease.