Description: In thinking about recent events and the Black Lives Matter movement, if you had to come up with a small number, how many different kinds of protests would you say there have been in North America focusing issues relating to the BLM movement? If you said 2 (non-violent and violent) then you have likely followed the debate in the recent American election that broke the question out along those same lines. Is there another kind of protest? Think about that for a minute and see if you can come up with another type of protest and some thoughts about how effective it would be in changing people’s minds, compared to the other two types. Once you have your alternative hypothesis in mind along with a few thoughts about how you would conduct research on this question without organizing actual protests read the linked article that describes research by some Social Psychologists on this very question. 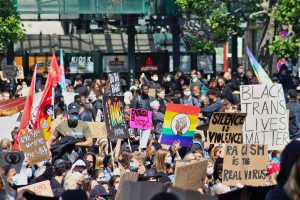 So, was your hypothesized new type of protest similar to the nonviolent nonnormative type of protest looked at by the Social psychologists? A useful way to think about these questions can be to start with the realization that what are at issue are social norms regarding how things usually or typically are and protests are essentially either arguments for changes in social norms or, in the case of violence, statements of anger regarding social norms which are sometimes viewed (dismissively) by non-participants simply as involving actions that break social norms. Finding a way to nonviolently be nonnormative in arguing for a change in a social behavior or norms provide both a new view and, essentially move it past concerns over possible norm violation by being nonnormative. The effectiveness of this strategy was demonstrated in the research discussed in the linked article in the finding that reading about it was effective in shifting the views of people who were initially opposed to the “new” views. It is wonderful to see ways out of dichotomous perspectives, especially in politically polarized locations. More research needed, quickly!

Selvanathan, H. P., & Lickel, B. (2019). Empowerment and threat in response to mass protest shape public support for a social movement and social change: A panel study in the context of the Bersih movement in Malaysia. European Journal of Social Psychology, 49(2), 230-243. Link