Description: Have you heard of implicit bias? While we define racism as an active belief involving negatively prejudging individuals on the basis of race, the concept of implicit bias is more complicated. Our mind is primed to make automatic associations between some concepts very quickly. Doing so in many situations provides an adaptive advantage. So for example quickly deciding that a snake one is just noticed in the grass is something to be avoided certainly has survival value. The problem arises when we begin to realize that we have a number of automatic or implicit tendencies that can be problematic in social situations where they come into play when they keep us from responding in ways that are actually congruent with our more positive social attitudes. This issue is further complicated by the fact that the term implicit bias has been picked up and discussed at length within the torrent of political discussion tied up in this fall’s upcoming American elections and in relation to concerns over the actions of police officers in relation to persons of color. As you read through the article linked below think a little bit about the difference between a political reaction and the potential value of psychological research into this quite important concept

Source: We’re All Little Biased, Even if We Don’t Know It, Emily badger, The Upshot, New York Times. 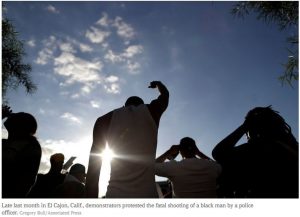 The role of cultural experiences and biases in human cognition is an important one to consider especially when the concepts being considered involve such things as race.” Provided by Jennifer Richardson a psychologist from Yale University that “these types of cultural biases or like smog in the air” is an important one to consider as is the quote of former college president Beverly Tatum that “to live and grow up in our culture, then, is to “take in” these cultural messages and biases and do so largely unconsciously”. While psychology has raised serious peer concerns over the extent to which Sigmund Freud relied on the notion of unconscious processing within his theory it is important that we remain open to the possibility that a lot of what is at play in our processing of information is in many ways simplified by the kind of culturally grounded assumptions that we make. Relying on at least some assumptions makes the kind of fast paced decision-making required for day-to-day life possible. Deciding when and how to build in practices and mechanisms that allow us to step back from my fast paced decision-making in order to avoid potential bias are critical questions to which psychological research will, hopefully, eventually be able to speak.