Description: Do you think of your car as male or female? How about your smartphone? What about your fridge? Oh and what about your robot? Don’t have one of those yet? This CBC story looks at the question of why it is that in our science fiction books and films and, it turns out, in our robotics labs, when we build a human looking robot and give it a male or a female appearance we also seem to provide them with VERY stereotyped characteristics as well? 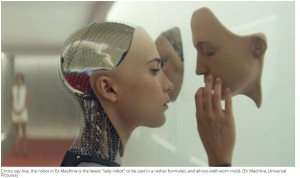 So ships are general female but what about other machines and what about robots? What about R2D2? Despite in-film references to it as a “little guy” “his” gender is not entirely clear. Is the robot “AVA” in the new film Ex Machina portrayed as stereotypically as “it” (she) is because of the fantasies of its predominantly male creators? It IS a fact that the field of robotics these days is predominantly male. This story asks the question of why our “creations”, when gendered, are so stereotypically rendered. Consider Ava (in Ex machine) versus T-800 Model 101 (Arnold Schwarzenegger in the Terminator film series) or Hal from 2001 a Space Odyssey. Given that built creations like robots cannot be said to have any sort of “inner genetic essence” it is clear that any gendered features of behaviours were put there or built in by their creators, in a concrete form of social construction. The results are worth serious reflection.