Description: The octopus is not a particularly social animal. While that might sound like the start to a fairy tale or to a “Just So” story it is actually simply a scientific fact. Octopi typically avoid social contact entirely including avoiding other members of their species. They Do, however, have to engage socially with at least one other octopus at least once in a while in order to mate. It turns out that octopi seem to use a mechanism to flip this social/asocial switch that is virtually identical to how we manage social connections, using the serotonin system. How did they test this? Well, they used the drug ecstasy or MDMA which alters mood in humans by driving a serotonin “dump” which, in the short term provides strong feelings of social connectedness and positive social affect in humans. How did this work in Octopi? Well read through the article linked below to find out. While you read through it pay attention to and think about what research like this with octopi might tell us about ourselves. 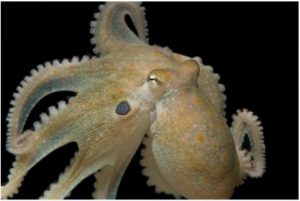 So, exposure to MDMA (ecstasy) lead the octopi to spend time being close with a caged male octopus while most octopi not exposed to the drug avoided the caged male octopi. Their behavior while on the drug paralleled that of human rave attendees on ecstasy (not the dancing but the increased frequency of social touching).  It seems that octopuses’ social behavioral tendencies are there most of the time but suppressed in and by non-mating circumstances in ways that produce the “loner” behavior they are best known for. The functioning of the serotonin system, while referred to most often in humans as region related to mood and being primary site of drug intervention in cases of depression, is likely involved in the evolution of our social connectedness as well.