Description: There is a LOT of Psychology that many people know about (thanks to the media, writers of trade publications and self-help books and Introductory Psychology instructors). But there is also even more Psychology that is not out there or that people may not know that they know. Read the article linked below (and/or watch the Ted talk also linked below) by British psychologist Ben Ambridge to see a bit about people’s Psyc-Q.

Source: Psyc-Q: You may know your IQ but what do you know about Psychology, your Psy-Q? 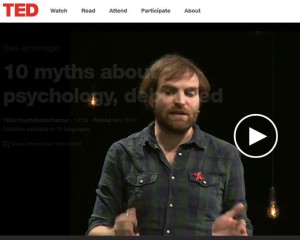 You have likely heard a number of myths or beliefs about things psychological held by the general public from you Psychology instructor. Ben Ambridge, a British psychologist has started to collect these myths, kernels of truth and realities together and, in a form of knowledge transfer from Psychology to the general public, he tells people (or writes in his books about) the myths and realities of human Psychological functioning. I do this when I teach as well. The gaps between Psychological knowledge (based on solid research) and common sense can be narrow in some areas and huge in others. Read through Ben’s psyc-quizzes (link 1) , watch his Ted talk (link 2) or read through his points on “Bad Psychological” science (link 3). And then see if you can think about some other myths from your own experience or course materials.