Description: So just what are the psychological consequences of spending a long time (1 year) in space? Well from 2001 a Space Odyssey to Interstellar there has been a lot of science fiction film speculation but what do we know from a scientific point of view. Quite a bit actually.

Source: PA Pacific Standard: What Spending a Year in Space Does to Your Mind — It’s stressful, but transcendental too. 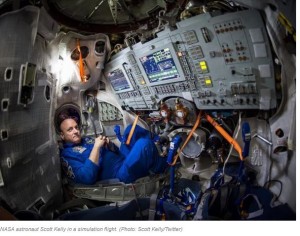 NASA and the Russian Federated Space Agency are each sending a man into space to stay on the international space station for a year. We can predict something of how their prolonged experience with zero gravity (Morphew, 2001) will affect them physically, (decreased bone density and muscle mass) but how will it affect them psychologically. Well, American Scott Kelly and Russian Mikhail Kornienko are going to provide psychologists with a lot of psychological data during their upcoming year in space completing cognitive tests and regularly writing journal entries that will later be reviewed by psychologists.

NASA has been a bit vague about how it selects potential; space station astronauts from a psychological point of view – generally preferring individuals who are easygoing, resilient and have good social skills (so they will get along with their fellow astronauts in close quarters). There has been some work of the subject of space psychology. Depression and conflicts can arise during such missions (Harrison, 2004) and earlier research suggests that anxiety, depression, psychosis and psychosomatic symptoms can also arise (Kanas, 1990).

To make things easier NASA has provided astronauts with inter-cultural training (as they will be living in space with Russians). As well NASA has developed a software program with cognitive behavioral techniques built in to assist astronauts in dealing with depression in in-mission conflict.