Description: Think of the last time you worked in a group, perhaps as part of a class project. If there was one group member in charge of the group, how did their behaviour towards individual members of the group and the group as a whole effect overall group performance as well as the feelings of individual group members? This article suggests the answer this question is somewhat complicated. 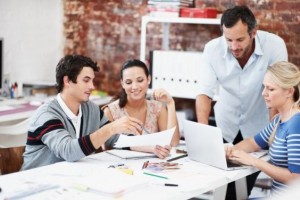 Workplace settings often involve the formation and ongoing functioning of teams. An increasingly large body of research both in social psychology and in industrial organizational psychology exam and the factors that influence team performance as well as the commitment of individual team members to team success. This study looked specifically at the role of managers in setting up and maintaining optimal group performance. Specifically the study examined the extent to which managers treated individual team members differently based on their levels of competence or ability as well as looking at the sorts of things that managers did to treat the team equally as a cohesive unit. The researchers suggest that neither strategy alone is sufficient for maintaining optimal group performance, and that successful managers need to work to find a balance between treating team members differentially based on their performance and abilities and treating the group as a whole in an equitable manner. The researchers also found that this balancing act becomes more complicated when one factors in cultural variability in such things as “power distance orientation” which is a reflection of how comfortable individual team members are with their being significant differences in the amount of power held by team members and managers. Basically teams from countries with cultures supporting higher power distance are more acceptable of larger levels of differential treatment amongst group members.