Description: Think about this statement. We have drugs that can treat the symptoms of schizophrenia for many who struggle with it and that means that we have figured out what causes schizophrenia or at least how it works on the brain. Is this true? Is it a little bit true? What do you think? The truth is we are really not very clear at all on what causes schizophrenia or on how it plays out in the brain, despite having drugs that seem to help some people with its symptoms. We are still looking for insights into the etiology (causes) of schizophrenia and part of that ongoing search involves looking for things, any things, that distinguish people with symptoms of schizophrenia from those without such symptoms. We are looking at genetic differences, experiential/developmental differences and brain differences to name but a few areas of research into this complex etiological question. One observation in this area, historically, was that the brains of individuals with symptoms of schizophrenia contain less grey matter (cortex) on average than do the brains of those without. What has not been clear is whether this is a pre-symptom correlate or if it is the result of atrophy in the brains of those with symptoms of schizophrenia and perhaps in those who are not treated or who do not respond well to treatments. But perhaps there is another possibility. Can you hypothesize as to what it might be? Once you have given it a bit of thought have a rad through the article linked below to see what the researchers whose work it discusses have speculated. 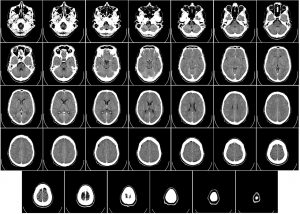 So, how did the article strike you? Were you  bit frustrated by the lack of speculation as to why there might be two types of schizophrenia, at least in terms of how they manifest in the neural structure of the brain? Well, the study is really just an initial step. Look at what the study DOES tell us. By carefully comparing the brains of schizophrenia patients and comparison individuals without symptoms of schizophrenia the researchers were able to partially sort out previous hypotheses regarding pre-existing or emerging over time differences in grey matter volumes and that is why they are confident in suggesting there are two types of schizophrenia potentially. Now, the work must begin to figure out the etiological (and experiential, prognosis and treatment) differences between the two types might be. Oh, and whether there might be more than two types if other factors are considered. We have a long way to go but we are moving.