Description: Do you know what to means to say someone is brain dead or to say that someone is in a vegetative state? If you see or hear a news story about someone being in a vegetative state what do you think that person’s future looks like, or do you think they really do not have a future because their brain – the higher areas of the brain where we think and where consciousness resides (perhaps) are no longer functioning and where the person’s basic body functions like breathing, heart functioning, coughing, or sleep “wake” cycles are still being managed by lower level brain stem centers. Deciding what we should do (or not do) to and for people in such states are medically, ethically and legally complicated and can be agonizing for the relatives of people in such states who could be asked to decide whether, or not, to continue feeding and hydrating the individual. One example is that of Ian Jordan who died in April of 2018 after having spent 30 years in an unresponsive state. His wife, Hilary, visited and spoke to him daily and believed that while her husband never responded directly to her that he was emotionally present. Until recently, our efforts to understand what it might mean to say someone was “brain dead” involved intensely searching for things they could be or for things that would indicate something that might look like consciousness or awareness. These searches lead to a distinction between a vegetative state and minimally conscious state. In a minimally conscious state some people can respond to some questions, sometimes doing so behaviorally rather than verbally (e.g., raising one finger for yes and two for no). Medically the view was and is that some people improve by shifting from vegetative to a minimally conscious state over time but that if there is no improvement within one month of non-traumatic brain damage or within 12 months following traumatic brain damage them the prognosis is that no change or “recovery” is expected. More recently, the increasing availability, at costs low enough to support repeated use for research purposes, of detailed brain scanning techniques such as functional Magnetic Resonance Imaging (fMRI) has made it possible to look deeply and specifically into the brains of people in vegetative or minimally conscious states to see what is going on and to see if they can or are responding to their surroundings. Adrian Owen, a neuroscientist working in Waterloo, Ontario, Canada asked people in vegetative states to imagine they were playing tennis and found that areas of some patients’ motor cortex would jump into action. With some patients he could have then imagine playing tennis if the answer to a question he posed them was yes and imagined moving though their house if the answer was no and was able to show that some, not all, patients were at least somewhat aware of what was going on around them. To find out what Adrian Owen believes this suggests not just about the brain but about related ethical and legal issues listen to him giving a talk about his work and about several of his more remarkable (miraculous) patients at the link below and while you do, ponder the ethical and legal implications of his work. 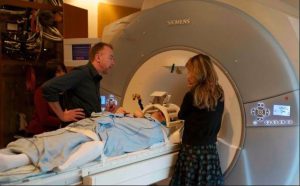 So, what do you think now about vegetative states?  The grey zone, as Adrian Owen calls it, challenges our assumptions about traumatized brains. His book on this topic is listed in the refences list below. One very important point Owen makes in his interview following his talk in the link above is that we need to closely examine what we are assuming when we use words like ‘recovery”. While he tells us of a few people who came back from a vegetative state to being able to function somewhat independently in the world, in fact, recovery might only mean an individual can indicate some level of awareness by raising a finger or thinking of playing tennis and many people show no sign even with detailed brain scans that they are aware of anything going on around them at all. Obviously more neuroscientific research is needed but so too is a lot of reflection and discussion about the ethical and legal issues surrounding those in vegetative and minimally conscious states.

Owen, A. (2017). Into the Gray Zone: A Neuroscientist Explores the Border Between Life and Death. Simon and Schuster.