Description: The debates and the research focused upon the impacts of video gaming and social media use on developing children and youth are heated and ongoing. The primary difficulty in sorting out the effects of video gaming and social media use is tied up in the comprehensive nature of their uptake in the population. As it was with similar debates regarding television watching in past decades, the problem is virtually everyone is doing it. If you find children and youth who have little or no screen time, they do not represent a good control group in screen time studies as they are not a good match for the main population. For example, it is frequently reported that upper-level executives in the big four online companies of Apple, Google, Facebook and Amazon do not allow their children access to social media and smart phones which may well be good for them but certainly would not be a well-matched control group for children and youth growing up in families within the lower 95% of the family income distribution. What to do? Well, one option is to do a longitudinal study with a very large representative sample and that way, at least to some extent, participants would serve as their own controls as the study would follow them over time. To prepare yourself to reflectively read the linked article, think for a moment about possible confounds that could arise when comparing video game or social media use at 11 years of age to self-reported depressive symptoms at 14 years of age. Once you have your thoughts sorted have a read through the article and see what you think of their results and of their appropriately detailed discussion of the challenges of attributing causality in such research. 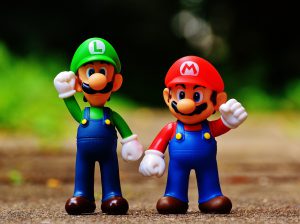 Photo Credit:  Image by Alexandra ❤️A life without animals is not worth living❤️ from Pixabay

One of the most difficult things to do when thinking about the sorts of issues that the research discussed in the linked article examined is that the issues, they are looking at matter to us. Rates of depression, anxiety and self-harm among early teens in North America have surged upward in just the last 10 to 15 years. When an issue matters that much to us (well, and a lot of other times too) we seem to have a bias towards viewing variables or factors that are associated or correlated with the behaviors or symptom collections of concern as causally related to that which is worrying us. It makes some sense to look at what is new (besides the life outcomes of concern) and decide that those things, the video games or social media, MUST be the causes of the things we are concerned about. They may very well be, BUT they may not be the direct or the immediate cause. Boys who play video games may be boys who are fitting in socially while those that do not may be boys who are socially marginalized and perhaps it is the marginalization rather than anything positive to do with the video games that increases rates of depressive symptomology. Similar challenges exist when trying to sort out the relationships between social media use and depressive symptomology among girls. This does NOT mean that we should just give up trying to sort these matters out. The researchers quoted in the linked article lay out a number of variables (such as parenting factors, types and amount of screen time etc.) that, if they are included in subsequent large research surveys, would help sort these causally complex questions out. More research is needed because we need to know more about what is going on in the way of stress, anxiety and depression among young people these days.