Description: When I am teaching about the brain in my introductory psychology classes and I talk about the cerebellum or “little brain” I (as psychology teachers and textbook authors have done for years) talk about the role that the cerebellum plays in “smoothing out” our motor movements and helping us be agile. That remains true but the article linked below tell us a much bigger story about the cerebellum. First, it tells us something I did not know, that this area of the brain got its name because it looks like a small brain (what I have been saying for years) but it also tells us the little brain was described as such my Leonardo da Vinci who, as were many of his fellow artists in the 1700’s was closely studying human anatomy in order to improve his depiction of it in his art. In his article, Christopher Bergland discusses recent research suggesting that in addition to smoothing motor movements the cerebellum may also smooth our “emotional processing, cognitive function, and overall mental health”. Quite an added array of roles for the smaller sibling of our brain! Have a read through the article and, while you are doing so, think a bit about what the research findings it discusses might suggest about how we think about and perhaps treat things like PTSD, anger management issues and stress. 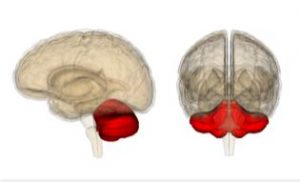 The cerebellum accounts for 10% of our brain volume but contains most of our brain’s total neurons so “whatever the cerebellum is doing, it’s doing a lot of it” (Larry Vanderverte). Ok so perhaps I have been somewhat neglectful of the activities of the cerebellum in my lectures about the brain. I will be looking more closely at this research area and we all might benefit form a better understanding for what the cerebellum does and how that fits in the bigger picture of human brain functioning.